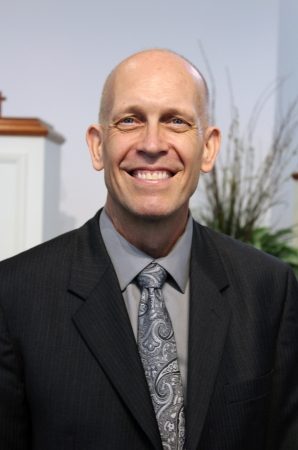 God in His grace has blessed me with the privilege of serving Him as the pastor of Cornerstone since September of 2011. Prior to that, in His providential plan, I served as the pastor of Covenant United Reformed Church in Kalamazoo, Michigan from June, 1996 to January of 2001 followed by the Escondido United Reformed Church, Escondido, California from January 2001 to August of 2011.

I was born into a covenant family to believing parents, who themselves were raised by godly parents. In His grace, God the Holy Spirit effectually applied to my heart the truth of God’s Word from a Reformed perspective which I had been taught at home, in church and in school, bringing me to true faith in the Jesus Christ, trusting Him as my only Savior and entrusting my life to Him as Lord. He led me to embrace the truth of Scripture as recovered through the Protestant Reformation, that salvation is by grace alone, through faith alone, by Christ alone, according to Scripture alone, for the glory of God alone. I attended Mid-America Reformed Seminary, now located in Dyer, Indiana.

God has blessed me with a God-fearing wife and amazing help-mate, Brenda, who has a love for the family of God and a passion for the fellowship of Christ’s Church. Together we have been blessed with six children, four children-in-law, and eight grandchildren.